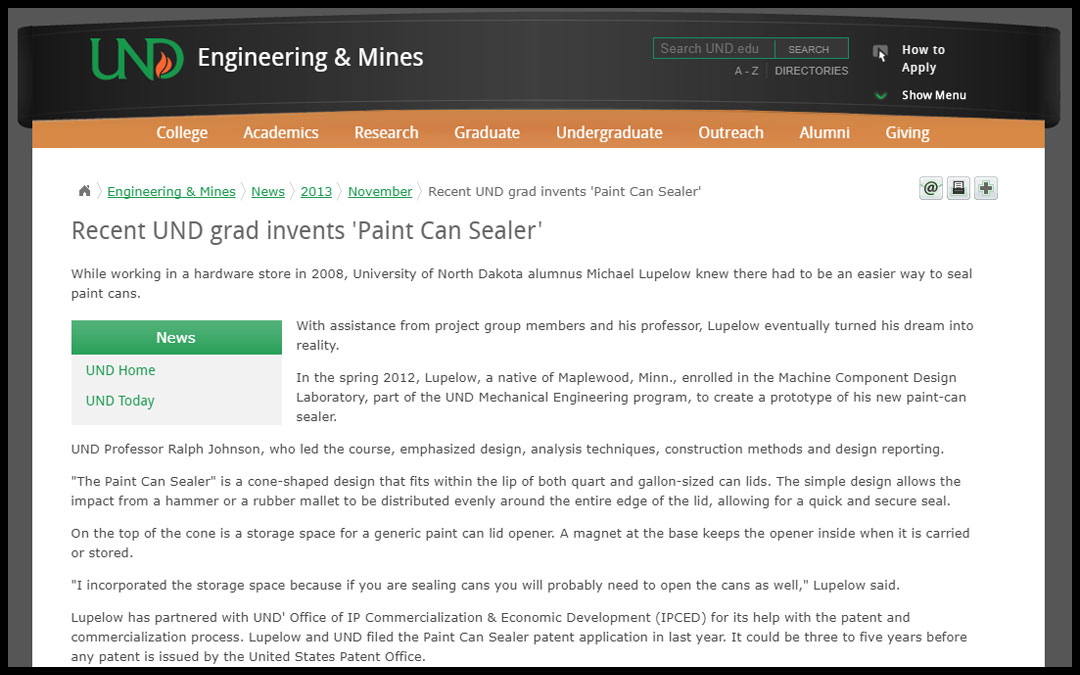 While working in a hardware store in 2008, Michael Lupelow, ’13, knew there had to be an easier way to seal paint cans. As part of a class project and with the assistance of a UND professor, Lupelow eventually turned his solution into reality. And now that invention could start paying off thanks to some assistance from the UND Intellectual Property Commercialization & Economic Development Office (IPCED).

IPCED was able to help Lupelow in his dealings with Progressive Paint Solutions, Inc., which licensed the rights to market and sell the UND-developed technology under the name “One-Punch & No-Mess Paint Can Sealer.”

Lupelow initially dubbed his invention simply “The Paint Can Sealer,” a cone-shaped design that fits within the lip of both quart and gallon-sized can lids. The simple design allows the impact from a hammer or a rubber mallet to be distributed evenly around the entire edge of the lid, allowing for a quick and secure seal. On the top of the cone is a storage space for a generic paint can lid opener. A magnet at the base keeps the opener inside when it is carried or stored.

Lupelow said, at first, he didn’t know much about UND’s IPCED office, but after one visit he was excited about what he learned.

“To my surprise they handle more than just patents, they also deal with commercialization and licensing,” Lupelow said. “It was an obvious choice from there, not only did the IPCED file a patent application on my behalf, they also secured a licensing deal with Progressive Paint Solutions to bring my invention to market.”

“The paint can sealer is a neat story,” said Michael Moore, UND associate vice president of IPCED, “Mike discussed the invention with us and even though UND doesn’t own most student intellectual property, he agreed that we would be a good commercialization partner for his invention.

“Tara Kopplin, our licensing associate in Physical Sciences, did a terrific job of finding a partner who saw the same opportunity we did. The team at Progressive Paint Solutions has been nothing but an enthusiastic partner and we look forward to a long relationship with them.”

Jason Pottinger, CEO of Progressive Paint Solutions, was surprised to learn that this product is the first of its kind. The company estimates that there are more than 100 million paint cans sold by 27,000 retail paint distributors across the country each year.

“We’re looking forward to seeing it carried in paint departments and at hardware stores across the country,” Pottinger said. “It’s a product that will receive a lot of attention when paint customers watch it in action at the counters.”

In spring 2012, Lupelow enrolled in the Machine Component Design Laboratory, part of the UND College of Engineering’s mechanical engineering program. There he created a prototype of the novel paint-can sealer under the guidance of Professor Ralph Johnson, who led the course.

Lupelow graduated from UND in the spring of 2013. He currently works as an ATV design engineer at Arctic Cat in Thief River Falls, Minn.

Corey Park, strategy advisor for Progressive Paint Solutions, said he’s impressed by the wide-spread attention the product is gaining from paint distributors and hardware stores.
“After launching this product, we immediately started receiving order requests from large companies in the paint industry,” Park said. “We knew we had a unique product, but the buzz it has created has exceeded our expectations.”