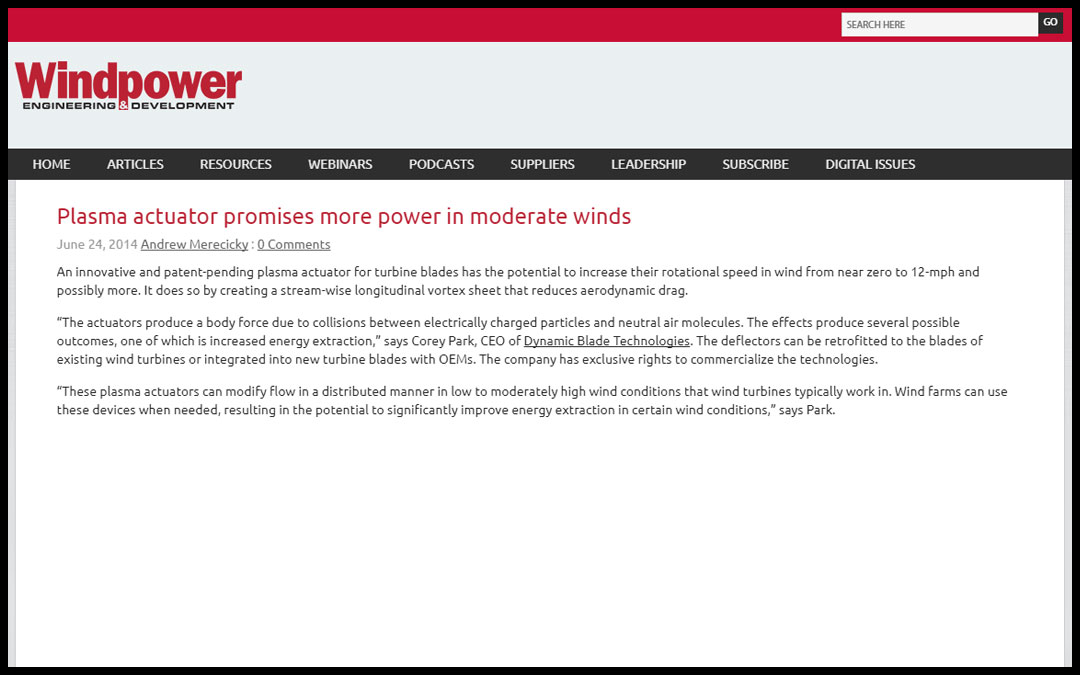 An innovative and patent-pending plasma actuator for turbine blades has the potential to increase their rotational speed in wind from near zero to 12-mph and possibly more. It does so by creating a stream-wise longitudinal vortex sheet that reduces aerodynamic drag.

“The actuators produce a body force due to collisions between electrically charged particles and neutral air molecules. The effects produce several possible outcomes, one of which is increased energy extraction,” says Corey Park, CEO of Dynamic Blade Technologies. The deflectors can be retrofitted to the blades of existing wind turbines or integrated into new turbine blades with OEMs. The company has exclusive rights to commercialize the technologies.

“These plasma actuators can modify flow in a distributed manner in low to moderately high wind conditions that wind turbines typically work in. Wind farms can use these devices when needed, resulting in the potential to significantly improve energy extraction in certain wind conditions,” says Park.

Each column represents a flow field on a surface with a plasma actuator. Top images show the field with actuator off, and the lower images with the actuator on. At lower velocities (blue and green) wall-jet effects dominate the near wall (blade surface) area. At higher velocities (yellow and green) actuation effects are lessened. In the impingement region, wall jets converge on themselves forcing the jet upwards and into the primary flow. In the divergent region, wall jets diverge, dominate the flow, and pull the flow downwards. The combination of these effects creates a complex vortex structure.

The technology was acquired from a major university and after about six years of development work. Based on laboratory tests, the researchers identified a range of advantages that extend beyond increased energy extraction. For instance, the plasma actuator:

According to Jenny Hinsman, the Chief Operating Officer of Dynamic Blade Technologies, “Plasma actuators can be placed at the most receptive locations on blade surfaces. They have no moving parts, which makes them amenable to high g-loading with high dynamic response.”

Multiple wind tunnel tests provided the data in the Comparison of flow field images. Hinsman says the plasma actuators will be prototyped over the next several months, adjusted for final designs, field tested, manufactured, and made available to the global wind market. She adds that a team of business executives, professors, industry experts, engineers, and development partners will be working to test, prove, and deploy the plasma actuators to the global wind industry. Park adds that the company is seeking development partners to field test these technologies. Interested parties and investors can reach Park at corey@windfarmtech.com.