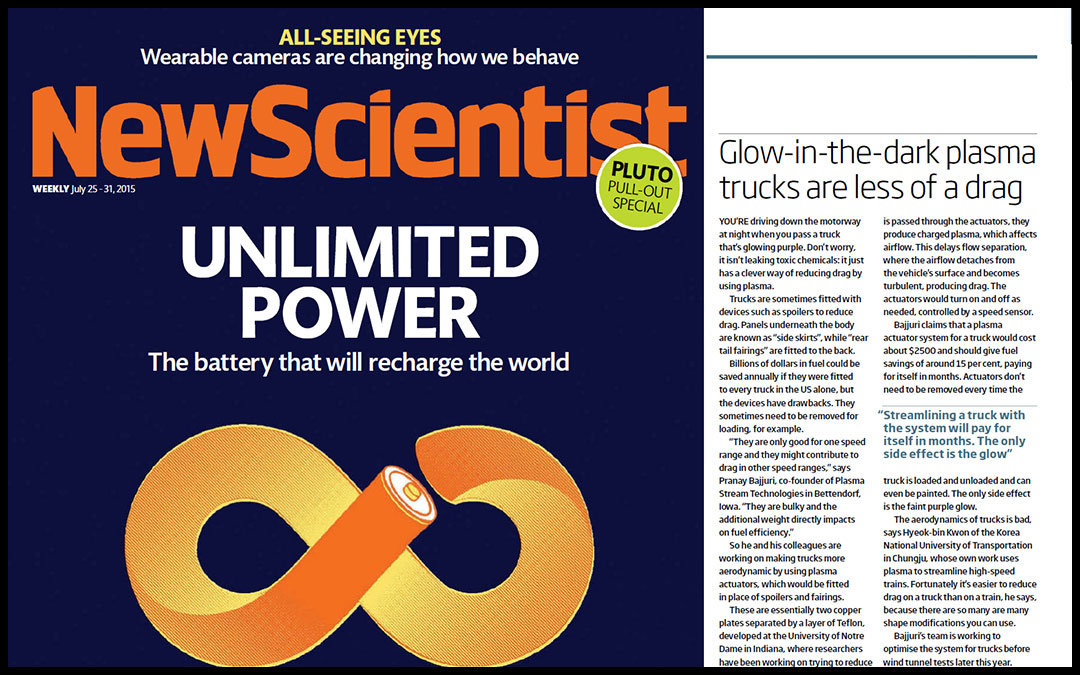 YOU’RE driving down the motorway at night when you pass a truck that’s glowing purple. Don’t worry, it isn’t leaking toxic chemicals: it just has a clever way of reducing drag by using plasma.

Trucks are sometimes fitted with devices such as spoilers to reduce drag. Panels underneath the body are known as “side skirts”, while “rear tail fairings” are fitted to the back.

Billions of dollars in fuel could be saved annually if they were fitted to every truck in the US alone, but the devices have drawbacks. They sometimes need to be removed for loading, for example.

“They are only good for one speed range and they might contribute to drag in other speed ranges,” says Pranay Bajjuri, co-founder of Plasma Stream Technologies in Bettendorf, Iowa. “They are bulky and the additional weight directly impacts on fuel efficiency.”

So he and his colleagues are working on making trucks more aerodynamic by using plasma actuators, which would be fitted in place of spoilers and fairings.

These are essentially two copper plates separated by a layer of Teflon, developed at the University of Notre Dame in Indiana, where researchers have been working on trying to reduce drag on aeroplanes. When a current is passed through the actuators, they produce charged plasma, which affects airflow. This delays flow separation, where the airflow detaches from the vehicle’s surface and becomes turbulent, producing drag. The actuators would turn on and off as needed, controlled by a speed sensor.

Bajjuri claims that a plasma actuator system for a truck would cost about $2500 and should give fuel savings of around 15 per cent, paying for itself in months. Actuators don’t need to be removed every time the truck is loaded and unloaded and can even be painted. The only side effect is the faint purple glow.

The aerodynamics of trucks is bad, says Hyeok-bin Kwon of the Korea National University of Transportation in Chungju, whose own work uses plasma to streamline high-speed trains. Fortunately, it’s easier to reduce drag on a truck than on a train, he says, because there are so many are many shape modifications you can use.

Bajjuri’s team is working to optimise the system for trucks before wind tunnel tests later this year.